Father Christodoulos Margellos was born and raised in Richfield Minnesota and grew up attending the parish of St Mary Greek Orthodox Church in Minneapolis. He graduated from Hellenic College in 2003 and from Holy Cross Greek Orthodox School of Theology in May of 2006. He was ordained to the Deaconate on July 2nd, 2006 at the parish of Sts Constantine and Helen in Merrillville Indiana. He was later ordained to the Priesthood on December 3 rd, 2006 at his home parish of St Mary in Minneapolis. He served as the assistant priest at Sts Constantine and Helen until March of 2011 when he was transferred to the parish of St George in Rock Island IL. He served the parish of St George until August 15th, 2015 when he transferred to the parish of St Nicholas in Oak Lawn IL where he served until March 1st of 2020. During his time there, he was elevated to the offikio (rank or office) of Archimandrite on December 6th, 2016 by his Eminence Metropolitan Iakovos of blessed memory. Father Christodoulos has served as both Vice President and President of the Metropolis of Chicago Clergy Syndesmos and is a former member of the Metropolis Council and board of the Saint Iakovos Retreat Center. He has belonged to the clergy at the Fanari Camp for many years, a ministry of the Metropolis of Chicago serving church youth through summer camp and outreach programs. Father looks forward to his new assignment at Assumption Greek Orthodox church here in Madison Wisconsin, and continuing his ministry and work in the Lord’s Vineyard. 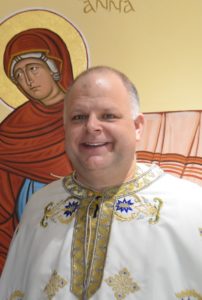 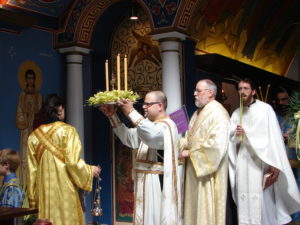 Reverend Father Michael (Richard) Vanderhoef, of blessed memory, was born and raised in the Madison, Wisconsin area and grew up attending Assumption Greek Orthodox Church of Madison. Showing an early talent and passion for music, he utilized his gift within the Church, singing in the choir and serving in the altar. He graduated from Stoughton Senior High School and attended the University of Wisconsin, Madison, earning a Bachelor of Music in Organ Performance degree, and then a Master of Library Sciences degree. He then moved to Brookline, Massachusetts where he attended seminary at the Holy Cross Greek Orthodox School of Theology, earning his Master of Divinity in 2002. While in the Boston area, he was very active in music, singing with the Boston Byzantine Choir, working with various area groups, composing and acting as an Adjunct Instructor of Byzantine Liturgical Music and Western Music Appreciation at Holy Cross School of Theology. He also worked in the campus Archbishop Iakovos Library as a Cataloguing and Systems Librarian and taught Byzantine Music at the Sacred Music Institute of the Antiochian Archdiocese of America. In May of 2000, he married Presbytera Patricia, who he shared a loving life and marriage with for two decades. They soon moved back to Madison, and in 2008 Richard Vanderhoef became an ordained priest to serve at his home parish of Assumption Greek Orthodox Church. His ordained name of Michael, was chosen to honor his late grandfather. During his parish tenure, Father Michael was naturally involved in music, at one point serving as Assistant Director of Assumption’s renowned choir and composing several hymns. As a presbyter he mentored a new generation of young chanters, expanded Greek School, Sunday School and youth programs, and oversaw a major building renovation. Outside of the Church, he was a longtime member of the University of Wisconsin Choral Union and served as Chaplain of the Association of Church Musicians. Father Michael fell asleep in the Lord January of 2020. We continue to pray, with hopes in the Resurrection, for his peaceful repose and are thankful for his constant intersession on our behalf at the Throne of Christ. May his memory be eternal. 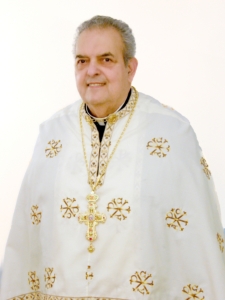 Father Joe, as he is known to all, is the longest-serving priest of the parish of the Assumption Greek Orthodox Church. He served from 1982 – 2008; not bad for a temporary assignment!

Father Joe was active in the Church from a young age. He joined the church choir at the age of ten and at the age of 18 led the Choir, for his very first time, at the ordination a priest. Following the service, Archbishop Michael thanked him, and later at the reception told the congregation that he believed that Joseph would be a priest someday.

After a stint in the army, Fr. Joe received his Bachelor of Science in Engineering from New York University and worked for many years for General Electric; first in Syracuse, NY and then in Milwaukee, WI. It was in Milwaukee that he revisited his dream of becoming a priest.

In 1973, he pursued the new “Priest with Lay Profession” program offered by the Archdiocese through his home parish of the Annunciation Greek Orthodox Church in Milwaukee. On April 20, 1975, Father Joseph was ordained a deacon by Bishop TImotheos of Chicago of blessed memory and after two years of on the job training, His Grace elevated Father Joseph to the priesthood on August 20, 1977.

From 1975 to 1995, Father Joe maintained dual careers. He held a variety of management positions at General Electric while at the same time serving as the Assistant Priest at Annunciation Milwaukee, temporary priest at SS. Constantine and Helen, Wauwatosa, and serving parishes in need of clergy throughout the Diocese; including Madison. In 1982, Bishop Iakovos assigned him temporarily to Assumption Madison. Fr. Joe often worked seven days a week, with his weekends full of church responsibilities. There were many days when he would leave his office at GE, and attend to a church community need. Fortunately, his position in the company, and his understanding superiors, allowed him the freedom to serve his parishioners.

During Father Joseph’s time at Assumption, the parish grew three-fold and our Church underwent many physical changes including: the solea and altar were remodeled in marble; a dividing wall was erected that created a real narthex; Iconographer David Giffey added more beautiful icons with Father’s wholehearted encouragement and support; the Sunday School was renovated, and the office was modernized. Father Joe’s favorite work was with children through Boy Scouts, Sunday School, Altar Boys (God Squad), JOY and GOYA, Vacation Bible School, and years of summer and winter Youth Camps.

In addition to his church duties in Madison, Father Joseph was the Treasurer of the Orthodox Clergy Syndesmos of Wisconsin; the Treasurer of the Chicago Clergy Syndesmos; and a Clergy representative on the Chicago Diocesan Council. He was Treasurer of the University Religious Workers of UW-Madison, and was a founding member of the Orthodox Christian Charities of Wisconsin. He also served as an Emergency Room Chaplain at Waukesha Memorial Hospital, and Chairman of Children’s Service Society and President of Waukesha Symphony

All of the many years of devotion and accomplishment could not have been attained without the Hand of God, Father Joseph’s profound faith, the spiritual guidance of his Metropolitan, and the loving support of Prezvytera Vasiliki, their family, fellow clergyman, and beloved parishioners. 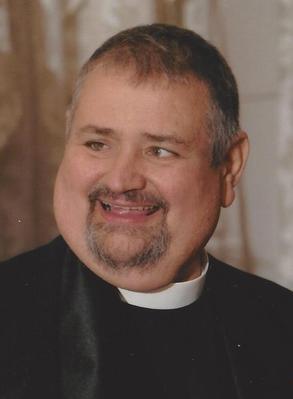 Father George Dounelis, of blessed memory, was born and raised in various parts of New York during the 1950s. He attended Franklin Pierce College in New Hampshire, and then later attended Hellenic College and the Holy Cross Greek Orthodox School of Theology in Boston, Massachusetts , graduating with a Master of Divinity in 1973. In that same year, he married Presbytera Kathryn (Phuros), was ordained a deacon at the Ionian Village in Greece, and finally ordained to the priesthood at St. Nicholas Greek Orthodox Church in Flushing Queens, New York. After serving St. Nicholas parish for two years as the second assistant priest, he was assigned to Assumption Greek Orthodox Church of Madison where he served the parish until 1980. During his time in Madison, the couple expanded their family with the birth of their daughter in 1979, to be joined later by their son in 1986. Later in 1980, he was reassigned to Kimisis Tis Theotokou in Holmdel, New Jersey where he would preside for the rest of his career, retiring in 2013. Father George Dounelis was an avid football fan and cook, frequently serving as Chief Grill Master at his children’s sporting events and community functions. He fell asleep in the Lord in 2015 after battling with breast cancer. May his memory be eternal.

Father John Mangos M.D., of blessed memory, was born in Greece in 1932. He graduated with highest honors from the Medical School of the Aristotelian University of Thessaloniki. He served as a medic in the Hellenic Army, and after his discharge he moved to the United States to continue his medical education. In 1964, he married Presbytera Rae (Mathewson) of Milwaukee. They settled in the Chicago area and he was eventually ordained a deacon at Saints Constantine and Helen in May of 1973. Two months later a he became a priest and served at Assumption Greek Orthodox Church of Madison for two years. He served in a part time lay capacity as he worked in pediatric medicine at the University of Wisconsin. He then moved to join the University of Florida – Gainesville as a professor and Chief of Pediatrics. While in Florida, he was instrumental in implementing continuous services at St. Elizabeth the Wonderworker Greek Orthodox Church where he served for several years. In 1982, Father Mangos left Florida when he was assigned to serve a parish in San Antonio, Texas. He went on to hold various distinguished positions at the University of Texas Health Science Center, including organizing the first division of pediatric pulmonology at the University in 1997 and founding the South Texas Aids Center for Children and Families and Providence Home and Family Services. Father John Mangos fell asleep in the Lord in 2016 after a lengthy battle with cancer. May his memory be eternal. 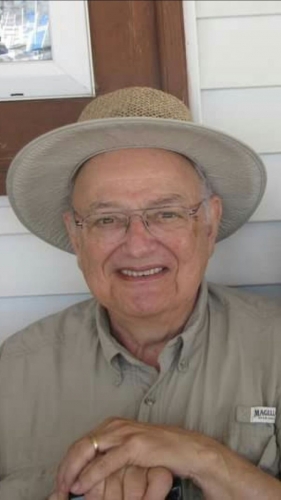 +Metropolitan Anthony of San Francisco, of blessed memory, was born Anthony Gergiannakis in March 1935, in the village of Avgeniki, on the Greek island of Crete. Growing up in Nazi-occupied Greece, he attended the ecclesiastical lyceum in Chania and later the renowned Halki Theological School of the Ecumenical Patriarchate in Turkey. While at Halki, he was ordained a deacon in 1958, and a priest in 1960, the same year he graduated. After ordination to the holy priesthood, he emigrated to the United States where he served as a parish priest in the Chicago area while earning his Master of Divinity degree from Yale University, and later pursued doctoral studies at the University of Wisconsin while serving at Assumption Greek Orthodox Church of Madison for five years. After being elevated from the priesthood in 1974, he became the Dean of St. George Cathedral in Montreal Canada where he served for four years before being consecrated the Titular Bishop of Amissos, within the Metropolis of Denver. In 1979 he was elected and enthroned the first Bishop of San Francisco and was made the first Metropolitan of San Francisco when the diocese was elevated to a Metropolis. He faithfully guided his flock for 25 years until his death on Christmas Day in 2004. +Metropolitan Anthony was known for his emphasis on education, love of children and fearless defense of Orthodox culture and religious canon. A dynamic and active hierarch, he was known as the ‘building bishop,’ due to his efforts of expansion and consecrating a Church per year during his tenure. May his memory be eternal.